Impact of parasite sympatry on the geographic mosaic of coevolution 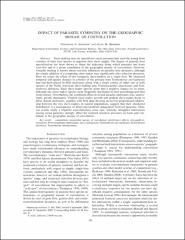 Slave-making ants are specialized social parasites that steal the young from colonies of their host species to augment their slave supply. The degree of parasite–host specialization has been shown to shape the trajectory along which parasites and hosts coevolve and is a prime contributor to the geographic mosaic of coevolution. However, virtually nothing is known about extrinsic influences on parasite–host dynamics, although the simple addition of a competing slave-maker may significantly alter selection pressures. Here we report the effect of two sympatric slave-makers on a single host. We measured temporal and spatial changes in colonies of the primary host Temnothorax curvispinosus that had been placed in field enclosures along with a single colony of either one or both species of the North American slave-making ants Protomognathus americanus and Temnothorax duloticus. Each slave-maker species alone had a negative impact on its hosts, although one slave-maker species more frequently decimated its host assemblage and then went extinct. Nevertheless, the combined effect in mixed-parasite enclosures was, surprisingly, greatly attenuated. Virulent slave-maker growth and prudent slave-maker decay in these shared enclosures, together with field data showing an inverse proportional relationship between the two slave-makers in natural populations, suggest that their checkered distribution is a consequence of direct asymmetrical antagonism between parasites. Thus, our results imply a tripartite coevolutionary arms race, whereby intraguild interactions among social parasites strongly affect the realized selection pressures on hosts and contribute to the geographic mosaic of coevolution.