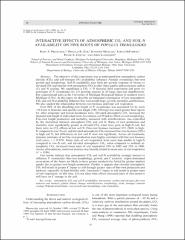 The objective of this experiment was to understand how atmospheric carbon dioxide (CO_2) and soil-nitrogen (N) availability influence Populus tremuloides fine-root growth and morphology. Soil-N availability may limit the growth response of forests to elevated CO_2 and interact with atmospheric CO_2 to alter litter quality and ecosystem carbon (C) and N cycling. We established a CO_2 × N factorial field experiment and grew six genotypes of P. tremuloides for 2.5 growing seasons in 20 large open-top chamber/root-box experimental units at the University of Michigan Biological Station in northern lower Michigan (USA). In this paper we describe an integrated examination of how atmospheric CO_2 and soil-N availability influence fine-root morphology, growth, mortality, and biomass. We also studied the relationship between root biomass and total soil respiration. Over 80% of the absorbing root length of P. tremuloides was accounted for by roots <0.4 mm in diameter, and specific root length (100–250 m/g) was much greater than reports for other temperate and boreal deciduous trees. Elevated atmospheric CO_2 increased the diameter and length of individual roots. In contrast, soil N had no effect on root morphology. Fine-root length production and mortality, measured with minirhizotrons, was controlled by the interaction between atmospheric CO_2 and soil N. Rates of root production and mortality were significantly greater at elevated CO_2 when trees grew in high-N soil, but there were no CO_2 effects at low soil N. Fine-root biomass increased 137–194% in high-N compared to low-N soil, and elevated atmospheric CO_2 increased fine-root biomass (52%) in high soil N, but differences in low soil N were not significant. Across all treatments, dynamic estimates of net fine-root production were highly correlated with fine-root biomass (soil cores; r = 0.975). Mean rates of soil respiration were more than double in high-N compared to low-N soil, and elevated atmospheric CO_2, when compared to ambient atmospheric CO_2, increased mean rates of soil respiration 19% in 1995 and 25% in 1996. Across all treatments, total root biomass was linearly related to mean rates of soil respiration (r^2 = 0.96). Our results indicate that atmospheric CO_2 and soil-N availability strongly interact to influence P. tremuloides fine-root morphology, growth, and C turnover. Aspen-dominated ecosystems of the future are likely to have greater productivity fueled by greater nutrient uptake due to greater root length production. Further, it appears that elevated atmospheric CO_2 will result in greater C inputs to soil through greater rates of fine-root production and turnover, especially in high-fertility soils. Increased C inputs to soil result in greater rates of soil respiration. At this time, it is not clear what effects increased rates of root turnover will have on C storage in the soil.