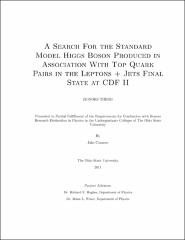 In nature we have observed that the weak force is inherently short ranged, and thus must be mediated via heavy gauge bosons. Explicitly adding mass terms for these particles to the Standard Model Lagrangian, however, breaks the gauge symmetry upon which the theory is constructed. In 1964, the so-called “Higgs Mechanism” was independently proposed by Robert Brout, Francois Englert and Peter Higgs, which spontaneously gives rise to the masses of the gauge bosons as well as the fermions. In the Higgs mechanism, a new complex scalar $SU(2)$ doublet field is added to the SM Lagrangian which below a critical temperature acquires a vacuum expectation value through spontaneous electroweak symmetry breaking. When this field is re-expanded around its new minimum, the mediating gauge fields of the electroweak interaction are mixed to produce three heavy gauge bosons $\left(W^+,W^-,Z^0\right)$ and one massless boson, the photon. The quanta of this new field has come to be called the Higgs boson and verifying its existence remains to be one of the last important tests of the Standard Model. The mass of this new particle, however, cannot be directly calculated due to the unknown self-coupling parameter of the Higgs field. Presented within is a search for the SM Higgs boson produced in association with a top quark pair at the CDF II detector at the Tevatron in \SI{6.3}{\per\femto\barn} of data. We consider events which have 1 or more identified charged leptons, an imbalance in transverse momentum and at least 5 jets, where at least two of these jets are consistent with originating from the decay of a $B$ hadron. Using a neural network ensemble technique, we place 95\% confidence level upper limits on the $t\bar{t}H$ production cross section for several Higgs boson masses ranging from \SI{100}{\giga\eV\per c^2} to \SI{150}{\giga\eV\per c^2}. For a mass of \SI{120}{\giga\eV\per c^2} the expected limit is $16.3$ times the standard model predicted cross section.