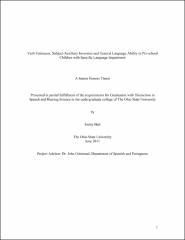 Children with Specific Language Impairment (SLI) are known to have problems marking finiteness (tense) on verbs. As a consequence, this has been shown as a clinical marker of the disorder. In this study, other constructions of difficulty for children with SLI are sought, as a means of improving diagnostic capabilities. To do this, a construction that theoretically depends on finiteness: subject-auxiliary inversion (SAI), is investigated. SAI is a word order alternation that occurs in questions, among other constructions, and has been shown to correlate in its development with finiteness. Work showing this correlation, however, was not able to remove the effects of general language development. To remedy this problem, and clarify whether SAI may be a potential clinical marker of SLI, three experiments were carried out. The first tested children’s knowledge of the Binding Theory, which determines the structural configuration in which pronouns, like (him), and reflexives, like (himself), can be used. Procedurally, the grammaticality choice format was used in order to present an equal number of grammatical and ungrammatical constructions (Pratt & Grinstead 2007). Children showed improvement with age in their judgments of Binding. For Experiment 2, test items were compiled from previous grammaticality choice measures of finiteness, SAI, and pronoun case with items from the Binding Principles task in order to determine whether finiteness and SAI still correlate with one another, but not with Binding results. Binding was used as a proxy for general language development and was partialed out statistically. Samples from experiments one and two were compiled of typically-developing (TD) pre-school children, in order to gain a sample of TD age controls. The third experiment of this study aims to uncover specific language impaired children’s judgments of SAI in order to investigate the reality of predictions made. 53 children between the ages of 3;1 and 6;2 participated in this study.