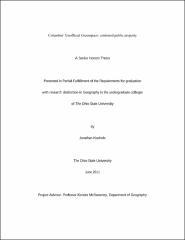 There are hundreds of acres of publicly owned property in and around downtown Columbus that are undefined. That is, they are not developed and lack designation as parks, nature areas or otherwise. While some land is clearly regulated—pedestrians are prohibited along interstates for obvious reasons—other lands are not. I take a critical look at the latter type to elucidate the ambiguities, contradictions and meanings that they embody. To be clear, I am not referring to the right-of-way of streets, railroads and highways, but to actual parcels of city-, state- and county-owned property (although on the ground, the line between them is often blurred). I argue that our legal and regulatory regime is inadequate for dealing with these places and in fact, does not deal with these places. Further, a case is made that the liability argument—the oft-cited rationale for attempting to exclude people from certain public lands—is weak. The concept of trespassing on public property is also called into question through the common law concept of necessity as it pertains to the homeless. An argument is made that land, like people can fall through the cracks in our society and it is the marginalized that tend to appropriate and shape the use of these places, challenging the law in the process.