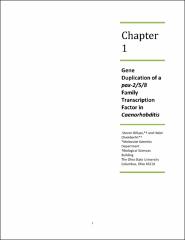 Comparison of Wnt Signaling in C. briggsae and C. elegans in Vulval Development

To better understand the functional consequences of gene duplication, we are studying duplication of a pax-2/5/8 gene in Caenorhabditis nematodes. There are two genes in the nematode C. elegans that code for PAX-2/5/8-related transcription factors, Celegl- 38 and Cel-pax-2. Species related to C. elegans have only one pax-2/5/8-related gene. To understand the functional consequences of gene duplication, our goal is to compare the functions of the two C. elegans genes to the single gene in C. briggsae, Cbr-egl-38. In an attempt to assess the function of Cbr-egl-38, we have used dsRNA E. coli feeding with no phenotypic change. We have also attempted dsRNA injection with no phenotypic change. Currently, we are constructing a heat shock promoter driven hairpin construct to ensure knockdown of Cbr-egl-38 in all tissues. We will observe the phenotypes associated with knockdown at various temperatures. We have also conducted a mutagenesis screen in hopes of identifying a Cbr-egl-38 mutant. F2 offspring of mutagenized C. briggsae animals were screened for egg laying defects (Egl) and other notable phenotypes. The animal lines with the Egl phenotype were analyzed under a compound microscope for defects in the egg laying system. The products of approximately 31,000 mutagenized gametes were screened. Over 50 mutant strains with notable vulval morphology defects were isolated. Twenty-five strains with phenotypes similar to Cel-egl-38 have been sequenced in search of a Cbr-egl-38 mutation. While there are no data to indicate the presence of a Cbr-egl-38 mutation in the isolated strains, at least 9 Biv, 5 Unc, and 12 Dpy mutants have also been isolated.