Tracking the Shifts of Métèque:Foreign Identities and Otherness in Contemporary France 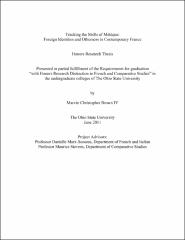 My thesis explores the history/etymology of the pejorative word métèque as it came to be applied to Jewish, Southern European, and most recently Arab Muslims immigrants to contemporary France. Even though it was derived from the Greek term metoikos, meaning outside the house, being a métèque in contemporary France reflects one's social status rather than citizenship as the term would in Ancient Greece. The pervasive use of the word in French grew in the 20th and early 21st century due to the willingness of French society to apply the term to whomever it viewed as a suspect foreigner (étranger) at the time. For my thesis I perform a close reading of various texts in literature and music to explore the ever shifting meaning of the term from those to whom the term has been applied. From Irène Némirovsky’s novel Le maître des âmes, to recent Hip Hop songs by Joey Starr and Rocé, each text examined features a different immigrant group struggling against the social stigma of being a métèque. By charting these shifts in the identity of the "other", I will map the ways in which French identity has shifted over the 20th century, locating the identity of the dominant society through the "other". This exploration has particular meaning in the face of France's recent national debate on identity, which followed President Nicholas Sarkozy's 2007 creation of a new Ministry of Immigration, Integration, National Identity and Co-Development in France.

The Arts and Science Honors Council