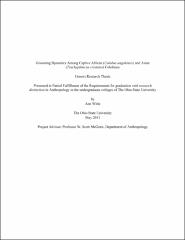 Allogrooming, or attentive manipulation of the fur or skin by other individuals, has both utilitarian and social functions. Evidence for the latter includes reciprocation of mutual grooming or alliance formation, conflict reconciliation, and social mobility in hierarchies. A large body of evidence from numerous primate taxa indicates that grooming tendencies are strongly associated with feeding competition, emigration patterns, and social structure. In this study, I examined differences in grooming frequencies within and between one group each of captive African (Colobus angolensis) and Asian (Trachypithecus cristatus) colobines at the Columbus Zoo. Data were collected from June – August 2010 using focal sampling methods which yielded approximately 50 hours of data for each group. Both groups are female-bonded (generally associated with strong female philopatry, kin support, and frequent female-female social behavior), and I predicted that grooming between females would be more frequent than female-male grooming in both species. However, because these species have different behavioral patterns in the wild, I predicted that there would be some differences of grooming partner preferences between these two populations (with a null hypothesis of no difference between groups). As previous research has shown a reduced amount of grooming exhibited in some wild Asian colobines, I predicted grooming frequencies would be higher in African colobus (C. angolensis) females than in silvered langur (T. cristatus) females. Using a chi-square statistic to test significance, female-female grooming was found to be significantly higher than female-male grooming among both T. cristatus (χ2 = 7.166, p = 0.007) and C. angolensis (χ2 = 43.183, p < 0.0005). The statistically significant difference demonstrated that silvered langur females actually groomed other group members more often than Angolan colobus females (χ2 = 28.528, p < 0.0005). I conclude that the female-bondedness exhibited in wild groups of both species is pervasive in these captive populations as represented by grooming. Differences between these populations and wild groups may vary according to differential group composition and bonding, small sample sizes, and/or disparities in enclosure space.

The Ohio State University’s College of Social and Behavioral Sciences