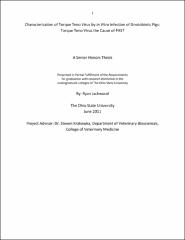 Viruses are important disease causing agents prevalent in all animal species. Understanding their characteristics and pathogenicity are crucial to control and prevent disease. Piglet Anemia Syndrome (PAS) is a neonatal anemia in piglets with no known cause. We began this project by looking at the possibility that porcine torque teno virus (TTV) plays a role in causing PAS disease syndrome. Chapter 1 characterizes genotype(s) of TTV identified in a continuous porcine alveolar macrophage cell line. Chapter 2 delineates preliminary in vivo challenge experiments with this TTV genotype. The porcine TTVs are classified into two genogroups (g1-TTV and g2-TTV). Like other Anelloviruses genomic diversity is a hallmark of porcine TTVs. Porcine TTV was found in a porcine alveolar macrophage cell line (3D4/2) and sequenced for identification and classification (Chapter 1). The macrophage cell line was then used to infect gnotobiotic piglets in order to determine its infectious capabilities (Chapter 2). The CD4/31-origin TTV used for the in vivo infection experiment was found to have an 81 percent homology to a combined g1- and g2-TTV sequence indicating the possible presence of a hybrid TTV virus. On or before ten days after challenge infection, in gnotobiotic pigs were shown to be TTV DNA viremic. In the challenged piglets, neither gross nor histologic findings characteristic of TTV infection were observed. These experiments were performed with the goal of obtaining knowledge that could potentially lead to the development of vaccines and reduce the presence of PAS in pig populations.