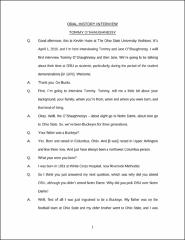 Born in Columbus in 1951 at what is now Riverside Methodist Hospital, Tom O’Shaughnessy attended Upper Arlington High School then went on to The Ohio State University, beginning classes in the summer quarter of 1969. In the fall of 1969 he joined the Freshman Senate, and went on to participate in Undergraduate Student Government throughout the student demonstrations and rioting in 1970. He was present as a representative of the student government at the protest on 12th and Neil avenues concerning the lack of African-American curriculum, and he remembers the violence at that event as the beginning of the riots at Ohio State. His further recollections include: Watching the National Guard fighting with students on the Oval; the protests that followed the rioting and student deaths at Kent State University; watching the National Guard take over St. John Arena and the ROTC building on campus after the rioting at Kent State; seeing the Administration Building vandalized by students; and personally being searched and questioned by authorities in association with the riots. As a member of the student government, he was also asked to monitor activity at the Botany and Zoology building on Neil Avenue, representing the student body in a peaceful and nonviolent way so as to discourage other students from causing physical damage to Ohio State property. When classes resumed in the fall of 1970, O’Shaughnessy recalls watching the departure of the military presence on campus, and the return to normal campus life, as well as the small victories for students that did come from the riots. Despite the turmoil during his early time at OSU, O’Shaughnessy remains an ardent Buckeye, and views the riots as a part of American history, not as a black mark against Ohio State or the administration at the time.