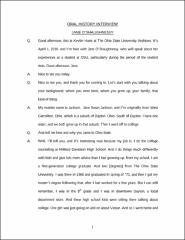 Born and raised in West Carrollton, Ohio, Jane O’Shaughnessy earned her bachelor’s degree in education from Ohio State University in 1970, and returned for her master’s degree after spending a few years working in her field. Originally, her experiences at Ohio State centered on going to class, meeting new people, and becoming involved with a sorority early in her freshman year. However, in 1968 with the assassinations of Dr. Martin Luther King Jr. and Robert Kennedy, students began to discuss different issues around campus, and after a trip to see Barry Goldwater speak in downtown Columbus, she realized that her school and her country were beginning to change. Her senior year began with the division of her sorority sisters due to some girls participating in the demonstrations, skipping class, and rebelling, while others wanted sorority life to remain the same. Martial law meant an 8 p.m. curfew, the National Guard standing on the street corners with guns, and widespread fear. Unprovoked pitching of tear gas during initiation week on sorority row, the student deaths at Kent State University and the early closure of Ohio State during her final quarter of school marked a fear-filled senior year at Ohio State. Attending graduation at Ohio Stadium, however, was both a rewarding and inspirational experience that was, in her mind, untarnished by any prior unrest on campus. She also comments on the effect that OSU Dean of Women Christine Conaway and OSU Football Coach Woody Hayes had on her time at Ohio State, and the efforts that Hayes made in terms of trying to get the students to act peacefully and responsibly during this time.