You're A Bodhisattva All The Time: An Exploration of Buddho-Catholic Syncretism in the Works of Jack Kerouac 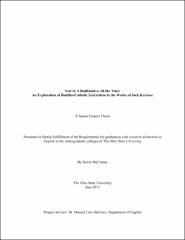 Jack Kerouac had a very tumultuous reign as “King of the Beats,” in terms of his personal religious views, and their relationship to McCarthy era society. This work analyzes the role that religious belief and syncretism – that is, the mixing of two distinctly different belief systems – play in three works by Jack Kerouac: The Dharma Bums, Some of the Dharma, and Visions of Gerard. Each text shows some of the ways that Kerouac conceptualizes and mediates the two major religions in his life (Buddhism and Catholicism). All three works contain some sense of what the sum of the two religions (Buddho-Catholicism) means for Kerouac philosophically, and what it means for 1950’s American society as a whole, in terms of economics and politics.