Characterization of Friend of Leafy1 in Arabidopsis thaliana 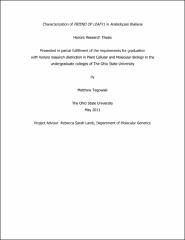 Understanding the process of flowering can be critical to the future of food production in our world. For this reason, research on flowering time and flower development is of utmost importance. One of the most important genes involved in flower development is LEAFY (LFY). This transcription factor has been shown to be necessary and sufficient for the switch to flowering. LFY regulates floral homeotic genes such as AGAMOUS (AG), which is involved in stamen and carpel development as well as meristem determinancy. When LFY is missing, the plant shows slightly delayed bolting, which is an indicator of the switch to reproductive growth, but not necessarily floral initiation. lfy mutants also show no normal flowers. The flower-like structures produced have an altered phyllotaxy, and do not produce petals or stamens. Sometimes, these structures will produce an aberrant carpel. In order to find out more about this topic, and to discover more about LFY, an examination was done to elucidate other proteins that possibly interact with LFY in planta. One of the genes that turned up from that endeavor was FRIEND OF LEAFY1 (FOL1). This gene encodes a protein that contains five C2H2 type zinc fingers and a glutamic acid rich region in the C-terminal end. This protein has found via GUS expression assays to be localized within reproductive structures, mainly the stamens, carpels, and both of the gametophytes. FOL1 expression was also found in the shoot apical meristems (SAMs) of Arabidopsis. I give the results of biochemical assays that confirm the interaction of the FOL1 and LFY proteins. I also report a characterization of lines of transgenic plants that express an artificial micro RNA (amiRNA) that targets FOL1 mRNA for silencing, as well as transgenic plants that express FOL1 constitutively.