Inside The Body Politic: Examining the Birth of Gay Liberation 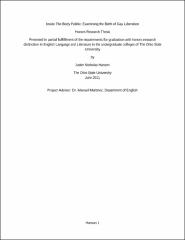 In this project, I examine a 1970s-1980s era Gay Liberation periodical which developed simultaneously with the Gay Liberation movement. The periodical, The Body Politic, was based in Toronto, Canada and enjoyed a worldwide following and fifteen year lifespan. I analyze the magazine’s content, relevant historical events and legal cases, and collected several oral histories of the founding members, contributors, and staff. I assert that the majority of The Body Politic’s articles can be classified as two forms of rhetoric: gay inclusive and straight exclusive. Using both forms of rhetoric and utilizing social and political dissent, the underlying goal of such rhetoric was the creation of a separatist gay culture: ulterior, distinct, and in opposition with the heterosexual or “dominant culture.” In this fashion, members of the Gay Liberation movement employed dissent to strengthen the solidarity of the gay community and to define the nascent gay culture under a banner of gay nationalism. Using acerbic critique and incendiary discourse, several authors of The Body Politic contributed to a hostile scenario to rally the unity of the gay culture. Fueled by such bellicose rhetoric and radical counterculture intellectualism, the early Gay Liberation movement took an aggressive, confrontational approach to political activism and Civil Disobedience which has affected the divisive nature of North American sexual politics to this day. Examining The Body Politic as a microcosm of the early Gay Liberation movement, I attempt to chart the origins of a specific communal gay identity that oftentimes placed itself at odds with the heterosexual community. Through this study, I attempt to illuminate some of the basis for the tenuous relationship between North American sexual cultures.