Swallowing a World: Virtue and Selfhood in the Postmodern Age 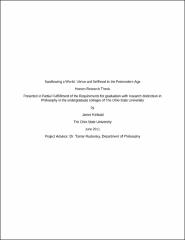 In "Swallowing a World: Virtue and Selfhood in the Postmodern Age," I explore two theories—anti-essentialism about selfhood and eudaimonistic virtue ethics—that have experienced resurgences since the 20th century. Champions of the former view include Martin Heidegger, Friedrich Nietzsche, G.W.F. Hegel, and Richard Rorty. Champions of the latter view include Aristotle, G.E.M. Anscombe, Philippa Foot, and John McDowell. I suggest that both views can be seen as reactions to postmodernity. Moreover, I amend the traditional Aristotelian theory so that it coheres with anti-essentialism, which rejects the teleology central to Aristotle's theory.