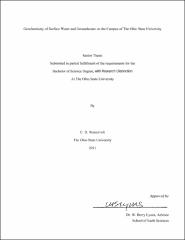 This study determined the elemental and isotopic composition and origin of the water that is present in Mirror Lake, the Olentangy River, and the groundwater found on the south campus of The Ohio State University and investigated potential surface water and groundwater interaction. Samples were collected of local precipitation, Mirror Lake, the Olentangy River, and south campus well waters from October 2009 to May 2010. Samples obtained during the Autumn of 2009 have also been analyzed for nutrient (nitrogen and phosphorus) concentrations. The Olentangy River waters have much higher nitrate concentrations than Mirror Lake, with the groundwater being of intermediate concentration. Nitrogen is an indicator of anthropogenic activities influencing the chemical composition of natural waters (Rakowsky, 2000). Total nitrogen was highest in the river, reflecting drainage from agriculturally dominated land north of Columbus. The highest total phosphorus was found in the groundwaters. The highest dissolved silica levels were observed in the groundwaters, indicating that these waters have undergone more extensive silicate mineral weathering than the other waters. Stable isotope ratios of 18O/16O and 3H/2H were also analyzed in these samples, and the data indicated a much larger variation in the surface water than in the groundwater. Chloride concentrations were most variable in the Olentangy and highest in the South Campus Well (Gardner and Carey, 2004). This could be a result of road and sidewalk salt running off into the groundwater. Potassium concentrations were nearly constant both annually and between the samples. Calcium concentrations were highest in the South Campus well, possibly a result of water-rock interaction between the groundwater and Columbus Limestone underlying the sample location. Concentrations of sodium were significantly higher in both the South Campus Well and the Olentangy River than in Mirror Lake. This could be a result of road and sidewalk salt runoff.