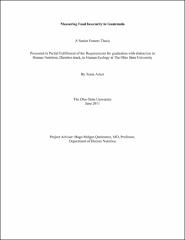 This thesis is an internal and criterion validation study on the Latin America and Caribbean Food Security scale (Escala Latinoamericana y Caribena de Seguridad Alimentaria - ELCSA) conducted in over 200,000 households in Guatemala. A fifteen-question survey was distributed in eight of the thirteen departments of Guatemala; from the indigenous western region, to the forested, impoverished northwest region. The eastern region was excluded. This study demonstrated the efficacy of the survey in measuring the severity of household food insecurity. The data were received from the Guatemala National Institute of Statistics and analyzed using the Rasch model to determine the survey’s internal validity, through use of a severity scale and infit values. The criterion validity was supported through use of 1-way ANOVA and chi square statistics and demonstrated statistically-significantly correlations between the food insecurity status found in this study and other previously identified food insecurity factors. This study further documented the Latin American and Caribbean Food Security scale as an internally and externally valid instrument recommended for use in national representative surveys to measure household food insecurity. A valid and reliable tool to measure food insecurity is necessary to successfully target at-risk and high-risk populations and to efficiently implement and monitor interventions.