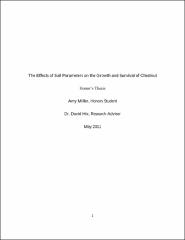 American chestnut was an important tree species in the eastern North American forest until near extirpation by chestnut blight. The American Chestnut Foundation (TACF) has been working to breed a blight-resistant chestnut through a backcross program using American and Chinese chestnuts. The Appalachian Regional Reforestation Initiative (ARRI) is a collaboration founded between environmental groups, the coal industry, academic institutions, citizen groups, and agencies to restore coal-mined lands. Forests were the predominant pre-mining vegetation of much of Appalachia’s present strip-mined areas, and are more beneficial ecologically and economically than the pasture that has been the post-mining land use. With the union of TACF’s hybrid seedlings and ARRI’s mission of mine reclamation, research is needed to examine the effectiveness of the establishment of chestnut on reclaimed mine lands. This study focused on a plantation of chestnut on reclaimed mine land in Carroll County, Ohio, with the aim of determining if soil factors, slope, and aspect significantly account for the observed differences among individuals in survival and growth. One hundred and forty trees were selected in a grid pattern, with a tree being the sampling unit. Soil sampling involved taking samples with a soil probe and a bulb planter. Soil analyses included pH, texture, bulk density, relative moisture, and a visual description of color and coarse fragments. Tree sampling classified samples as live and dead, and cross-sectional area was calculated for living trees. Statistical methods utilized included analysis of variance and linear regression. Relationships were explored among combinations of variables such as cross-sectional area and texture, observing both degree of correlation and significance. Analysis is ongoing but preliminary results indicate a significant relationship between tree survival and slope, with moisture and pH appearing to be important co-factors.