The Role of Queer Identity Among Cross-National Latinas 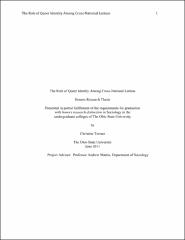 Latino immigrants are a fast growing population in the United States, contributing to a variety of groups, including the lesbian, gay, and bisexual (LGB) community. Prior research indicates that many Latino men do not identify as gay or bisexual, even if having relationships with other men (Center for Disease Control [CDC], 2000; Diaz & Ayala, 2001; Almaguer, 1993); however, current research lacks focus on lesbian and bisexual women and how they view a queer identity. Given how stigmatized homosexuality is in many Latin American countries and the United States, qualitative one-on-one interviews were used to examine the assertion of a LGB identity, including what forces contribute to this proclamation -- be that preventing forces or contributing forces both in the home country and abroad. Findings show that although these women must navigate complex and sometimes conflicting expectations regarding their multiple identities, asserting queerness is still important for the maintenance of self.