The Relationships between Self-esteem, Binge Drinking and Sexual Risk Behaviors among Young Women 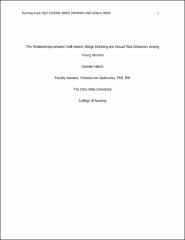 Sexually transmitted infections (STIs) are a growing problem nationwide, according to the Centers for Disease Control and Prevention (2009), there are approximately 19 million new STIs each year, and almost half are among young people ages 15 to 24. Untreated STIs are estimated to cause at least 24,000 women to become infertile each year (CDC). Students with low self-esteem, consumed more alcohol, had more sexual partners, and had more HIV risk-taking behaviors than other students (Gullette & Lyons, 2006). What is not clear from the literature is how psychological variables affect risk behaviors in a nationally representative sample. The purpose of this study was to evaluate the relationship between self-esteem, alcohol use, and sexual risk behaviors. Methods: This is a secondary analysis of data from The National Longitudinal Study of Adolescent Health (Add Health) database, which is a longitudinal study of a nationally representative sample of adolescents. The Add Health cohort has been followed into young adulthood with four in-home interviews, most recently in 2008, when the samples were aged 24-32, just emerging into adulthood and more likely to have opportunities for drinking and sexual behaviors. Wave III data for females was used (N = 2629). Analysis: Pearson bi-variate and Spearman Rank correlations were conducted for variables of interest. Linear regression analysis was used to examine the relationship between the sexual risk behaviors, alcohol use and self-esteem. A p-value less than .05 was considered statistically significant. Results: Education was not related to binge drinking or self-esteem. Higher levels of self-esteem were related to higher levels of binge drinking. Sexual risk behaviors were related to self-esteem. Unlike previous studies, binge drinking was not related to sexual risk behaviors. Implications: These results will aid in the development and implementation of gender-specific interventions aimed at impacting sexual risk behavior among women.