The Informal Housing Crisis in Cape Town and South Africa 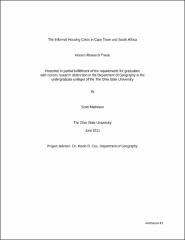 This study concerns the housing conditions of Africans in urban South Africa. Informal housing, or shack dwelling, is common although there are variations across provinces. Shack dwellings are self-built, often out of discarded building materials and packing cases. They are not subject to building codes and generally lack basic services including electricity, sewerage and running water. To acquire these services residents often illegally and dangerously tap into municipal facilities. The proportion of urban Africans living in shacks is unusually high in the Western Cape province, including its largest city Cape Town. In the Western Cape in 1997 statistics show over half of all urban Africans lived in informal housing. This was a rate twice as high as for South Africa as a whole. Ten years later this disparity was reduced but the rate of shack dwelling in the Western Cape was still sixty percent higher than in the whole country. Since the fall of the apartheid regime, Cape Town has become an increasingly popular destination for Africans re-locating from the former homelands in the Eastern Cape. Statistics show that the high rate of shack dwelling has no relationship to the relative wealth of urban Africans between provinces, nor to the length of time a person has resided in a shack. The extremely high rates of urban growth in the Western Cape over the past twenty years would appear to be part of the explanation. There are still questions surrounding the formal housing supply in the Western Cape though, and why it has not responded to this urban growth. The study draws on survey materials compiled periodically by the national statistical organization, Statistics South Africa. These allow relative frequencies to be derived and incorporated into cross-tabulations. Simple effect statistics are used to evaluate the hypotheses advanced in the research.