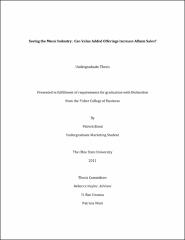 The music industry has been steadily hemorrhaging sales over the past decade, mainly due to the widespread emergence of digital music piracy. Though much effort has been put forth to stop illegal file-sharing, no actions in the US have been fruitful so far. Making the situation even more dire, there have been very few efforts to research how to sell music to the new pirating generations, and the music industry seems to no longer know its consumers. This research focuses on finding a solution to music industry woes that can be enacted more easily than legislation: how to create music offerings enticing enough for today’s pirating-prone consumers to buy instead of pirate. After a thorough examination of industry insider publications, previous studies on piracy, and an exploratory pretest, a hypothesis was proposed that there are two basic types of music consumers who would behave differently in response to value-added offerings (i.e., something “extra” beyond the basic album): high involvement “Music Lovers” and low involvement consumers who tend to simply seek out the latest single with a “Search and Destroy” mindset. To test this hypothesis, I conducted two studies in which 523 participants between the ages of 18 and 22 were asked about their purchase intentions for a new album either with or without a value-added offering (unreleased tracks in Study 1, a chance to meet the artist in Study 2). Results from these studies confirm the hypotheses; offering unreleased tracks increases purchase intentions for Music Lovers, but not for Search and Destroy participants, while offering a chance to meet the artist does the opposite. The implications of this research could be significant; if value-added offerings can increase sales of albums, then this new approach to selling music (i.e., offering something beyond the basic album) could make selling music in the 21st century a much more feasible venture.

Fisher College of Business at The Ohio State University