Effects of resveratrol on cancer cachexia in a mouse model 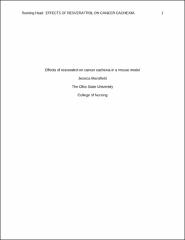 Cancer cachexia, characterized by muscle wasting and fatigue, affects many cancer patients. Inflammatory processes are implicated in the pathobiology of cancer cachexia. Resveratrol, a compound found in red grapes, peanuts, and dark chocolate has been found to exhibit anti-inflammatory properties. This study evaluated resveratrol as an intervention to decrease or reverse symptoms of muscle wasting and fatigue in tumor bearing mice. In mice, fatigue is measured as decreased voluntary wheel running activity (VWRA). The sample included 4 groups of seven C57BI/6 female mice. Using a quantitative, experimental design, each mouse was housed alone and acclimated for 10 days to a running wheel. Half the mice were injected with Lewis Lung Carcinoma cells and half served as healthy controls. Half the tumor and control mice were treated with a slow release pellet planted under the skin designed to deliver 1 mg/kg/day of resveratrol over 21 days, and half received a placebo pellet. Wheel running activity was measured at day 0, 7, 14, and 19 of tumor growth. At the end of the experiment, gastrocnemius muscles were removed and weighed to evaluate muscle wasting. A two-way (tumor drug) analysis of variance was used to determine the effect of tumor growth and resveratrol on muscle mass and fatigue. Analysis showed no effects of resveratrol on muscle mass, VWRA, or tumor growth compared to control animals. However, VWRA was significantly correlated with muscle mass. The data indicate that resveratrol at this dose had no effect on muscle wasting or fatigue in tumor-bearing mice. However, loss of muscle mass may directly contribute to fatigue as indicated by the correlation between muscle mass and VWRA. More research is needed to develop effective interventions to reduce muscle wasting, which may reduce fatigue in patients with cancer cachexia.