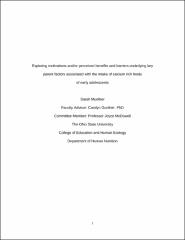 The origins of osteoporosis can be linked to a deficiency of calcium intake during childhood. Achieving an adequate intake of calcium is particularly important between the ages of 10 to 13 during peak bone growth. Parents play a critical role in helping children consume a sufficient level of calcium by promoting intake of calcium rich foods (CRF). As part of the USDA W2003 multi-state project, the objective of this study was to investigate the motivators and/or benefits and barriers underlying parent factors associated with calcium intake in early adolescents, including: role modeling intake of CRF; making CRF available; and setting expectations for intake of CRF. To achieve this goal, we conducted 3 focus groups in our target population of low-income, non-Hispanic white parents with early adolescent children. In the focus group addressing role modeling, utilizing nominal group technique, participants were asked to brainstorm personal benefits received from role modeling intake of CRF. Next, participants shared their responses and as a group ranked the top 3 benefits. Having a smart, focused child was ranked highest, followed by watching children become role models to younger siblings and own children. Having fewer trips to the doctor/dentist while saving time/money and observing children living better as they grow tied for 3rd. Participants suggested that having educational videos about CRF and seeing pictures of unhealthy, calcium deficient children would motivate them to role model intake of CRF. Parents reported that barriers to role modeling include: lack of time; defiant, picky eaters; and lack of resources. At the completion of this study, we expect to have a better understanding of the motivators and/or perceived benefits and barriers of key parent factors that influence intake of CRF by early adolescents, which will facilitate identification of relevant messages that will motivate parents to promote CRF to their children.