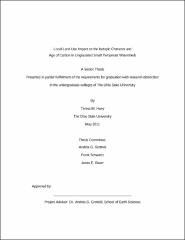 The impact of local land-use practices on the transfer of carbon from land to small headwater streams is understudied despite the fact that it has the most pronounced impact on stream carbon at these scales. We measured the stream water concentration, δ13C, and Δ14C of dissolved organic carbon [DOC], particulate organic carbon [POC], and dissolved inorganic carbon [DIC] in temperate headwater streams. The streams drained a forested, unimproved pasture, large and small mixed land-use, and tilled and no-till corn watershed in Coshocton, Ohio in the fall, spring, and summer and during a winter and spring storm event. Annual carbon fluxes of DOC and POC were greatest in the tilled corn watershed than in all other watershed types. Stream δ13C-DOC values indicate that this carbon pool was mainly derived from the present overlying vegetation. Δ14C-DOC was all modern suggesting vegetative root exudates contributing to the DOC pool. Δ13C-POC values indicate that this carbon pool was derived from a mixture of C3 vegetation and soil organic matter in the non-corn watersheds, and C4 vegetation in both corn watersheds. Δ14C-POC values indicate that in the non-corn watersheds, this carbon pool was derived from a mixture of modern overlying vegetation and deeper pre-agricultural soil. Corn δ13C-DIC and Δ14C-DIC indicate that DIC was derived from atmospheric CO2 equilibration interactions suggesting that respired DOC and POC minimally contribute to the DIC pool. δ13C-DIC and Δ14C-DIC values in the non-corn watersheds indicate that a mixture of carbonate bedrock dissolution and respiration of organic matter are the primary sources of carbon to this pool. Overall, the flux, isotopic signature, and radiocarbon age of the three carbon pools show that crop practices, especially when tilled, enhance carbon delivery to streams and reduce the residence time of carbon in the watershed.