Stratigraphy and Sedimentation of Lower Beacon Rocks in the Central Transantarctic Mountains, Antarctica 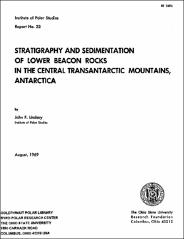 Institute of Polar Studies Report No. 33.

The horizontally bedded lower Beacon rocks of the Queen Alexandra,Queen Elizabeth, and Holland Ranges rest unconformably on the highly deformed Precambrian to Lower Paleozoic basement complex. The sequence is divided into the Alexandra, Pagoda, and Mackellar Formations. The Devonian(?) Alexandra Formation consists of more than 300 m of well-sorted, cross-bedded, quartzose sandstone. The sediment was deposited in a high energy, shallow water, non-marine environment. Current structures suggest that sediment was supplied from both sides of a narrow basin and transported to the southeast along the length of the basin. The Permian Pagoda Formation, which rests disconformably on the Alexandra Formation, consists of 125 to 395 m of interbedded tillite and sandstone. The Pagoda Formation was deposited from temperate ice by an ice sheet of continental proportions. Evidence from elsewhere in the Transantarctic, Ellsworth, and Pensacola Mountains suggests that the ice sheet was centered in southern Victoria Land. The ice sheet advanced on one or more occasions as far as the Shackleton Glacier (about 950 km) but during other advances extended beyond the Pensacola Mountains (more than 2000 km). The Pagoda Formation is conformably overlain by 61 to 121 m of thinly bedded shales and fine-grained, ripple-drift cross-bedded sandstones which make up the Permian Mackellar Formation. Evidence of a strandline to the west of the area suggests that the Mackellar Formation, like the Alexandra Formation, may have been deposited in a narrow basin. Sediment was transported to the southeast and deposited in a low-energy environment which locally may have been stagnant. The origin of the Mackellar Formation is probably related to isostatic depression of the land surface and the final retreat of the ice sheet which allowed an inland extension of the sea.