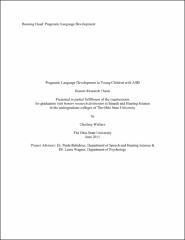 The purpose of this study was to examine the pragmatic impairments that exist in young children with Autism Spectrum Disorder. A measure adapted from Baron-Cohen, Surian, and Van der Lely (1996) called The Gricean Pragmatics test was used to evaluate how severe the pragmatic impairments were in the subjects with ASD, how their performance compared to their neurotypically-developing (NT) counterparts, if there were differences according to which Gricean Maxims were tested, and finally, if there were any underlying factors that contributed to pragmatic ability. The results showed that the children with ASD performed successfully on this task, possibly indicating that the majority of the children in this study had a less severe form of ASD. Furthermore, significant correlations were found between overall Grice scores and Peabody Picture Vocabulary Test, 4th Edition (PPVT-4) scores and also between overall Grice scores and digit span scores. These findings indicate that language ability and working memory play a role in overall Grice performance; possibly indicating that in general, children with higher IQs will perform better on the task.