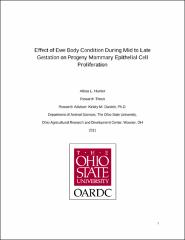 Dam body condition score (BCS) during mid to late gestation may affect progeny mammary epithelial cell proliferation. To study this, pregnant ewes (n = 96; ≈80 d of gestation) were allotted to treatment groups based on initial BCS of 2, 3, or 4 (on a 1 to 5 scoring system with 1 being extremely thin and 5 being extremely fat). Ewes were housed in 18 pens (6 pens per treatment) and fed a diet of limit-fed corn silage (1.1 kg DMI/d), to which whole shelled corn was supplemented at 0.12, 0.26, and 0.47 kg DMI/d for BCS groups 2, 3, and 4, respectively. Diets were adjusted every 2 wk to maintain desired BCS throughout pregnancy. Prior to weaning, lambs nursed their mothers and were fed a common starter. Lambs were weaned (≈56 d of age; 23.59 kg) and placed on a common finishing diet that met NRC requirements. Female progeny from the three BCS groups (n = 73) were slaughtered at similar BW (46.9 ± 0.5 kg), and age (126.3 ± 2.8 d). Udders were removed and mid-parenchymal samples were obtained, fixed in formalin, and later embedded in paraffin blocks. Five-μm thick tissue sections were cut, mounted onto slides, and underwent immunohistochemical staining for the Ki67 antigen, a nuclear cell proliferation marker. Three digital pictures were captured per lamb and further analyzed to determine a Ki67 labeling index (number of Ki67 positive epithelial cells / number of total epithelial cells x 100). Data were analyzed with the Mixed Procedure of SAS using a model that included the effect of dam BCS and considered the covariates breed, parity, birth type, and rear type. Dam BCS tended to affect (P = 0.058) Ki67 labeling index of progeny. Numerically, female progeny of BCS 4 ewes had a lower Ki67 labeling index 3 (4.08 ± 0.72%), than either progeny of BCS 3 ewes (6.36 ± 0.79%), or progeny of BCS 2 ewes (6.27 ± 0.82%). These data suggest but do not demonstrate an effect of dam BCS during mid to late gestation on postnatal progeny mammary epithelial cell proliferation. Given that mammary epithelial cell number is positively correlated with milk yield, our observations here require further evaluation as they may have important lactation performance implications.