Delay estimation of DPOAEs: Is the f1 or f2 sweep more accurate? 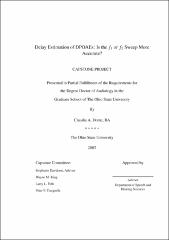 Distortion product otoacoustic emission (DPOAE) delay estimation has important implications for models of emission generation and cochlear mechanics. However, the DPOAE signal environment makes the accurate estimation of DPOAE onset a difficult task. To date, two Fourier domain methods have been used exclusively in f1 and f2 sweep methods for DPOAE delay estimation. However, these sweep methods suffer from serious limitations. Additionally, the two different sweep methods result in large differences in the estimated DPOAE delay, which are incompatible with the physical reality. In this study, a novel technique is employed for DPOAE latency estimation based on zero-phase filtering and penalized contrast changepoint estimation. This method has the advantage that it can be applied to a DPOAE time series evoked with a single (f1, f2) primary tone pair. The results are compared in the same human subjects against the traditional Fourier methods. The changepoint method provides support for the notion that the difference between the f1 and f2 sweeps is artifactual and that the f2 sweep times may be closer to the true delay.