The Effects of Exenatide on the Autoimmune Development of Diabetes 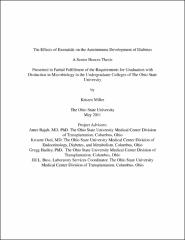 Autoimmune diabetes is a chronic disease that occurs when the pancreas does not produce the insulin required to properly control blood glucose levels. Also know as type 1 diabetes, this disease is caused by an autoimmune attack of a person’s T-cells on islet b cells. Exenatide, an incretin mimetic, is an analog to Glucagon-like peptide-1 (GLP-1). GLP-1 has many actions that improve glucose homeostasis such as potentiation of glucose-stimulated insulin secretions, promotion of b cell proliferation and survival, and inhibition of glucagon secretion. Some studies have shown that exenatide and related compounds can protect b cells from apoptosis as well as block the migration of CD4+ T-cells to islets. Therefore, we hypothesize that exenatide may prevent the autoimmune development of diabetes in the non-obese diabetic (NOD) mouse model. Thirty NOD mice were split into two groups. Beginning at 6 weeks of age, Group 1 (n=15) was given a 100ng dose subcutaneous of exenatide once daily and Group 2 (n=15) was given a dose of saline once daily. Glucose levels were monitored twice per week and animals were considered diabetic when blood glucose levels exceeded 300mg/dl. Once animals were considered diabetic, the pancreas was removed for histological analysis by staining for CD4+ T-cells and insulin. By 30 weeks of age, 76.9% in Group 1 (exenatide) remained free of diabetes compared to 13.3% of animals in Group 2. Immunohistochemical staining revealed higher concentrations of insulin producing cells and lower concentrations of CD3+ T-cell presence in treatment mice from Group 1. Based on the results from this study, it appears that exenatide reduces the incidence of diabetes in NOD mice. Animals treated with exenatide showed reduced blood glucose levels compared to those receiving saline, while immunohistochemical staining revealed insight into the possible mechanisms by which exenatide may function. From this study, it can be concluded that exenatide is an effective preventative treatment for the autoimmune development of diabetes. To further study the mechanisms by which exenatide works, a second study was proposed. In this study, we hypothesize that one mechanism by which exenatide delays or prevents the onset of type 1 diabetes is by modulating the migration of T-cells to the pancreas, thus preventing islet beta cell destruction and subsequent development of the disease. Seventeen NOD mice were split into two groups. Group 1a (n=9) received a 100ng dose subcutaneous daily of exenatide while Group 2a (n=8) mice received a 100ul subcutaneous dose of saline daily. Glucose levels were monitored once per week and animals were considered diabetic when blood glucose levels exceeded 300mg/dl. Mice expressing the luciferase gene have proven useful in research due to the ability to image their cells/tissue using an in vivo imaging system (IVIS) that detects the luminescence produced after administration with the enzyme substrate luciferin. Isolated splenocytes from NOD L2G85 luciferase positive mice were transferred to the study group mice at individual euthanization time points. Bioluminescence imaging was used 3 days following T cell transfer in order to visualize the location and/or pathway of the T cells. Average photons in each experimental group were measured within a region of interest (ROI) at the approximate location of the pancreas using IVIS equipment. The exenatide group was found to have an average of 1.190 x 105 photons whereas the saline group was found to have an average of 1.445 x 105 photons. Bioluminescence imaging did show some reduction in the presence of transferred T-cells at the pancreas of exenatide-treated compared to saline mice. Although the difference in measured photons is not significant between the two groups, we do not discredit our hypothesis. We believe that the experiment should be repeated with modifications to enable a better analysis of our results.