The Impact of Community Context on the Risk of Recidivism among Parolees at One-, Two- and Three-Year Follow-ups 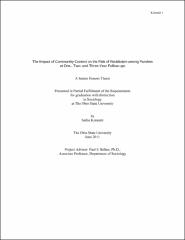 In 2009, 5,018,855 offenders were released from prison under some sort of community supervision. Of these, 819,308 were released on parole, meaning they had served an allotted amount of time in prison and were to complete the rest of their sentence outside of a correctional facility. However, 14% of this population returned to prison in 2009. This places an economic burden on both state and federal correctional systems, which are already buckling under the pressure of budget cuts brought about by the recent economic collapse. Therefore, it is imperative to identify the external factors that influence the rate of recidivism among parolees to alleviate the financial burden that re-incarceration incurs to both the state and federal governments as well as taxpayers. A careful analysis of the recidivism rate of offenders in Ohio released on parole indicates that race, poverty, female-headed households, and availability of manufacturing jobs show strong predictability of re-incarceration. Thus, changes in rehabilitation focus to prepare prisoners to better cope with the environment into which they are released has potential to decrease the recidivism rate and ultimately help both state and federal corrections departments meet budgetary constraints.