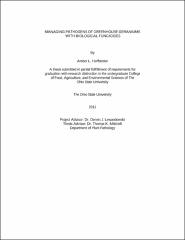 The amount of pesticides used annually by the agriculture industry is nearly a billion pounds, worth over US $31 billion. According to the USDA, biological fungicides are beneficial fungi and bacteria that attack and control plant pathogens. The advantages of biological fungicides are reduced risks to the applicator, reduced number of applications, a shortened re-entry interval, and a potential to control both soilborne and foliar pathogens. Botrytis cinerea causes blight, a very common and destructive disease of greenhouse crops that is estimated to cause the largest economic loss of all ornamental diseases. Cease is a biological fungicide with the active ingredient Bacillus subtilis Strain QST 713, a ubiquitous naturally occurring bacterium that controls many plant fungal pathogens. The common practice recommended by plant pathologists of using different modes of action was incorporated into an experiment for controlling B. cinerea with a biological fungicide. Veranda O has the active ingredient of polyoxin D zinc salt, a byproduct of the soil bacterium Streptomyces cacaoi var. asoensis. The mode of action is to interfere with the fungal cell wall production by inhibiting chitin synthase. In this experiment, both biological fungicides were used alone and in alternating combinations, each starting with a different mode of action. Fungicides were sprayed once per week for four weeks inoculating with a spore suspension four hours later. Plants were bagged to maintain high humidity. Neither Cease nor Veranda O used alone gave significant disease control. However, using alternating combinations of the two biological fungicides on a weekly basis significantly reduced the sporulation of B. cinerea. The Cease/Veranda O combination gave the highest level of disease control when compared to the other treatments. The combination starting with Cease and then Veranda O on a weekly basis provided a comparable level of control to a fungicide commonly used by the greenhouse industry to manage botrytis gray mold. This data set shows that rotations between different types of biological fungicides may be suitable alternatives to conventional fungicides. Pythium spp. cause root rot on a variety of crops and is a serious disease of greenhouse geraniums. Rootshield is a biological fungicide currently available with the active ingredient Trichoderma harzianum Rifai strain KRL-AG2. Trichoderma spp. are fungi that are naturally present in many soils and habitats. They are known to colonize plant roots readily and grow on the roots as they develop. In addition to colonizing roots, Trichoderma spp. have been known to attack and parasitize other fungi through many different mechanisms. There has been limited work with Rootshield as a biological fungicide and its ability to control pythium root rot of geraniums. Rootshield was tested to determine its effectiveness in controlling root rot caused by two different pythium species in a controlled environment. This data set shows that using Rootshield to control two different pythium species can work in certain instances and depends on the environment and the inoculum load.