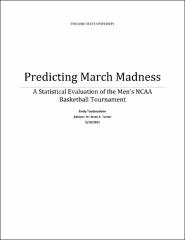 In men’s college basketball, the National College Athletics Association (NCAA) tournament to determine the Division I national champion is part of a highly publicized and lucrative cultural phenomenon called “March Madness”. For schools and coaches, especially those in major conferences, there is tremendous pressure to succeed and advance. Fan participation is another major component of March Madness. Before the tournament, millions of fans fill out empty brackets attempting to predict the outcome of all 63 games, often betting money on their predictions. There are many theories about how to fill out the brackets, ranging from arbitrary (choosing teams based on jersey color) to historically justified (choosing teams based on poll rankings). Some theories are based on historical precedent or statistical modeling, but there are many other theories about different predictors that have no statistical basis and yet are widely followed. The purpose of this study was to statistically test many prominent theories and then compare and combine the variables to create a model to most accurately predict success.