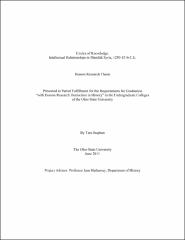 While Americans often associate Islam with strident public pronouncements, Islamic societies have experienced a more subtle, yet socially widespread phenomenon of intellectual exchange that traces back through the centuries. The Mamluk Sultanate of Egypt and Greater Syria (1260-1517 C. E) existed as a powerful force between east and west during the Middle Ages. The Sultanate was ruled by mamluks, predominantly Turks from Central Asia or Circassians from the Caucasus, brought to the Middle East to serve as slave soldiers. Scholarship has benefited from the fact that many primary sources exist, yet historians tend to focus on Egypt in their studies of the period, leaving relatively little research on Greater Syria. In this study, I seek to analyze intellectual relationships in Mamluk Syria, specifically how they formed and among whom, and their function within the larger society. Through analyzing education, I have been able to discuss broader social and cultural aspects of the Sultanate. In order to accomplish these goals, I have read scholarship on Islamic education, histories of the Mamluks, social and cultural trends in Egypt and Syria, and a biographical dictionary. Often I have had to extrapolate data from Egypt in order to make assumptions about Syrian society. Through my research, I have developed the following hypothesis: due to the way scholars transmitted knowledge in Islamic society, intellectual relationships in Mamluk Syria formed within complex social circles and encompassed a variety of classes and groups rather than being based on affiliation with a certain school or institution. I discuss educational practices among the intellectual elite, Sufis, women, and other classes of society to support my thesis. This study of intellectual relationships adds to the existing research on the Mamluk Sultanate and provides a discussion of Syrian society, which is necessary for our understanding of this politically important region today.