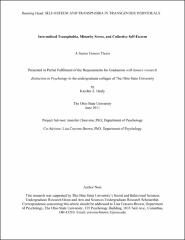 Minority stress occurs when negative societal views (e.g. transphobia) are internalized and it is expressed in the transgender population as difficulty with interpersonal relationships, depressive symptoms, and lower self-esteem. To our knowledge, only one study - using exclusively male-to-female (MtF) participants - has explored collective self-esteem (CSE) and minority stress in the transgender community. Differences between MtF and female-to-male (FtM) individuals (e.g., visibility, discrimination, and age of transition) may limit the generalizability of such research to FtM individuals. The current study extends the earlier design to the FtM population and further explores the relationships among internalized transphobia, effects/beliefs related to trans-status, collective, and global self-esteem. Data were collected online using Survey Monkey. Recruitment occurred at a transgender conference, internet postings through social media (i.e., Facebook, Tumblr and Livejournal), and word of mouth. The sample included 108 individuals who self-identified on the transgender spectrum, consisting of 79 natal females (FtM; mean age 25.09, SD = 8.01) and 29 natal males (MtF; mean age 42.22, SD = 13.27). Multiple important differences between MtF and FtM participants were found in addition to differences between this sample and the earlier study, suggesting that the previous strategies of participant recruitment and inclusion of exclusively MtF subjects are inadequate to ensure generalizability. Further analysis, results, and conclusions are discussed, along with suggestions for future research.