Cohabitation and Relationship Quality Across the Transition to Parenthood 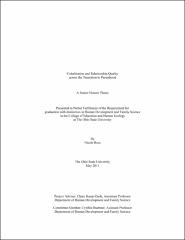 The current study looks at how the initial transition to parenthood effects couples differently based on their status. A sample of 182 currently married or cohabiting couples (New Parents Project) from a Midwestern city was given questionnaires to measure each couple’s relationship quality (Dyadic Adjustment Scale) and the types of resources (i.e. emotional, social, financial) that go into the keeping up the couple’s relationship at four different time points. The study found that currently cohabiting couples reported lower relationship quality than both groups of married couples: married, premarital cohabitation, and married, no premarital cohabitation. Using a random effects regression model, the study also found that the depressive symptoms and family and social resources to be important mechanisms in the difference in relationship quality between currently cohabiting mothers and both groups of married counterparts as well as the difference in relationship quality between currently cohabiting fathers and married, no premarital cohabitation. Further studies into this realm should include a more diverse sample and the support of observational data.