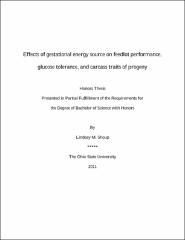 Effects of maternal energy source during gestation on postnatal growth and metabolism of progeny has not been well described. The objectives of this experiment were to determine the effects of hay (HAY), corn (CORN), or dried distillers grains (DDGS) fed to cows in late-gestation on progeny post-weaning growth, glucose tolerance, and carcass characteristics. Angus-cross cows (n = 84; BW = 620 ± 12 kg) were blocked by BW and allotted to 4 pens per treatment. Dietary treatments were fed at isocaloric intakes from 155 to 272 d of gestation. Following parturition, cows and calves were fed and managed as 1 group. Post-weaning, steers (n = 27) and heifers (n = 27) were transported to the feedlot, housed in individual pens, and fed a common diet which contained 50% cracked corn, 20% DDGS, 15% corn silage, and 15% supplement (DM basis). A glucose tolerance test (GTT) was conducted on calves (n = 12) on d 41 and d 111 after feedlot arrival and blood samples (n = 7) from each calf were collected from 5 to 120 min post-glucose intravenous infusion (0.25 g of glucose/kg of BW). Calves were slaughtered at a 12th rib fat thickness of 1.2 ± 0.05 cm as determined via ultrasound. Gestational diet did not affect (P ≥ 0.30) progeny feedlot performance (initial BW, final BW, DMI, ADG, or G:F). During the GTT, fasting concentration and area under the curve (AUC) for glucose and insulin were not affected (P ≥ 0.47) by treatment. Glucose clearance rate was greater (P = 0.01) in progeny from dams fed CORN than progeny from dams fed HAY or DDGS. Initial insulin response was greatest to least (P < 0.01) for calves from cows fed CORN, DDGS, and HAY, respectively. Fasting insulin, insulin AUC, glucose AUC, and glucose clearance rate were all greater (P < 0.01) on d 111 than d 41. There were no differences (P ≥ 0.33) among treatments for carcass characteristics. Gestational energy source did not affect feedlot performance or carcass traits; however, it did affect glucose clearance rate and initial insulin response. Days on feed increased insulin resistance and decreased glucose tolerance when cattle were fed a high-grain diet.