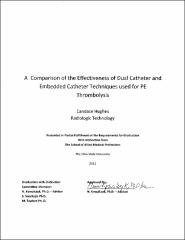 Pulmonary Embolism (PE) is a blockage of a major blood vessel in the lung, which commonly occurs when a blood clot that forms in the lower extremities breaks loose and becomes lodged in the circulatory system of the lungs. The standard medical treatment of patients with a PE is systemic intravenous thrombolysis; however administering a systemic thrombolytic agent is associated with hemorrhage risks and also the small risk of hemorrhagic stroke. One alternative to systematic intravenous thrombolysis is catheter-directed therapy (CDT) utilizing tissue plasminogen activator (tPA). There are multiple methods of CDT that vary in the process of delivery and amount of the lytic, as well as the number of catheters used, however the most effective method has not been well established. The purpose of this study is to compare patient outcome data regarding the use of single and dual catheter directed therapies and intrathrombotic and extrathrombotic lytic administration. A retrospective analysis of patient data was conducted on a sample of 35 patients with a known PE who underwent a CDT tPA administration. A point biserial test was used to evaluate the relationship between the two independent variables, single and dual catheter(s) and catheter placement (intrathrombus or proximal to the thrombus) to two dependent variables, duration and pulmonary artery pressure. The results of the test showed no significant correlation. Contingency table measures of association were used to examine the two independent variables and dependent variable of the presence of Right Ventricular Dysfunction. Results were reported as phi coefficients and showed no significant correlation. These findings indicate that there is not a significant correlation between the independent variables and the dependent variables. Previous research indicates a significant decrease in mortality when the PE is detected early and the correct treatment is performed. This study, although limited, helps to identify best methods in the CDT treatment of PE.