Nursing Care of the Obese Critically Ill Patient: Examination of the Processes of Care 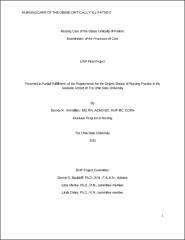 Study Purpose: To determine if the same level of nursing care was provided to all patients, regardless of the patient’s BMI, during the first 5 days after admission to a medical ICU. Research Design: A quantitative descriptive design was used in this project. Sample and Setting: A convenience sample was used and data collected retrospectively from medical records of subjects admitted to medical ICU between July 2010 and September 2010. Subjects ≥ 18 years of age, with both a height and weight documented were included. Individuals under 18 years old, pregnant women, prisoner patients were excluded. Measures: Data collected included frequency of patient repositioning, frequency of oral care, height and weight, positive pressure ventilation, admission Braden Score, presence of pressure ulcer on admission and discharge, length of ICU stay (LOS), and SAPS II score. Data Analysis: Included descriptive statistics for all clinical data collected. Correlations were calculated to determine relationships between pressure ulcers, Braden score and SAPS II scores. Analysis of variance was used with Tukey post-hoc analysis to describe the significant between-group differences. Outcomes: The data indicate that half of all subjects admitted to the medical ICUs were obese, and 18% are morbidly obese. Morbidly obese patients have a longer ICU. There were few differences in nursing care provided to subjects based on BMI. Fifty-eight percent of the subjects were at high risk for a pressure ulcer developing, and 12% of the subjects developed a pressure ulcer. No relationship was identified between Braden Score, pressure ulcer development, and BMI.