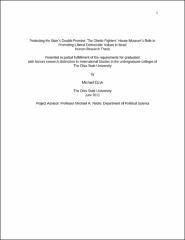 An interdependent relationship between liberal and communitarian values rests at the heart of Israel’s self-conception as a Jewish and democratic state. Its Declaration of Independence clearly outlines the state's responsibility to ensure collective rights while also equally protecting all of its citizens' individual freedoms. However, decades of war, religious and nationalistic ideologies, socialist influences, and a thick collective identity partly rooted in the traumatic memories of the Holocaust have led communitarian values to become the predominant social norm in Israeli society. Yad Vashem, Israel’s official memorial to the Holocaust, has played a major role in fomenting a common Jewish identity around the collective trauma of the Holocaust. In contrast, the Ghetto Fighters' House Museum strives to promote liberal-democratic values that prioritize the individual over the collective. The museum’s decentralized design, ambivalence towards displaying graphic depictions of Nazi atrocities, and multicultural educational programs all play a role in fostering an ethos of individualism. Furthermore, the museum's leitmotif of resistance is a medium through which it promotes a liberal culture of individualism that empowers the individual to stand apart from the crowd and openly denounce and resist prejudicial attitudes. One of the most influential ways the State of Israel can honor its dualistic commitment to both the individual and the collective is by bringing the Ghetto Fighters’ House Museum into the mainstream of Holocaust education in order to serve as a counterbalance to Yad Vashem.