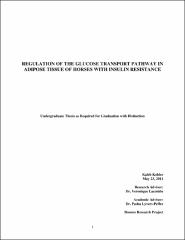 Although the importance of adipose tissue (AT) glucose transport in regulating systemic insulin sensitivity is becoming increasingly evident and insulin resistance (IR) has been widely recognized, the underlying alterations in glucose transport and its contributions to IR are still not well understood. The purpose of the present study was to determine the early pathological changes in glucose transport by characterizing alterations in glucose transporters (GLUTs) in visceral and subcutaneous adipose depots in a novel equine model of naturally occurring compensated IR. AT biopsies were collected from horses, which were classified as insulin-sensitive (IS) or compensated IR based on the results of an insulin-modified frequently sampled intravenous glucose tolerance test. Protein expression of GLUT-4 (major isoform) and GLUT-12 (a newly discovered isoform) were measured by Western blotting in visceral and subcutaneous adipose depots, along with AS160 (a potential key protein in GLUT cell-surface trafficking). Using a biotinylated bis-mannose photolabel technique, active cell surface GLUT-4 and-12 content was also quantified to estimate GLUT trafficking. Omental AT had the highest total GLUT-4 and GLUT-12 content compared to other sites during the IS state. IR was associated with a significantly reduced total GLUT-4, but not GLUT-12, content in omental AT, without a change in content in the other adipose sites. In addition, active cell surface GLUT-4, but not -12, was lower in subcutaneous and visceral AT of IR compared to IS horses. Impairment in GLUT-4 trafficking occurred independently of any changes in AS160 phosphorlyation between groups. The data suggests that GLUT-4, but not -12, is a pathogenic factor in AT during naturally occurring compensated IR, despite normal AS160 activation.