The Relationship Between Internet Marketing, Search Volume, and Product Sales 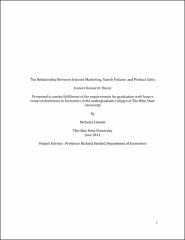 This paper determines whether internet advertisement, and a product’s online popularity, as measured in search queries, can predict sales revenue. To test for correlations, the sales data, ad spending, and Google keyword search volume for Apple’s iPod and iPhone was collected, and developed into a finite distributed lag model. The model for the iPod’s sales revenue shows that there is a strong seasonal effect on sales, and neither the internet popularity, as measured by Google searches, or advertisement spending has a statistically significant effect. The iPhone’s sales revenue is shown to be significantly influenced by the internet popularity, and its lag. The iPhone’s revenue is not significantly affected by advertising or seasonality. The results of this study could be used to determine the effectiveness of advertisement on consumer interest in a product, on the internet. Similar models could be able to determine whether Google search volume can predict the sales revenues of other products.