Theoretical study on rotational bands and shape coexistence of ^183,185,187Tl in the particle-triaxial-rotor model 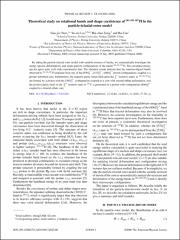 By taking the particle-triaxial-rotor model with variable moment of inertia, we systematically investigate the energy spectra, deformations, and single-particle configurations of the nuclei ^183,185,187Tl. The calculated energy spectra agree quite well with experimental data. The obtained results indicate that the rotation-aligned bands observed in ^183,185,187Tl originate from one of the [530]1/2^-,[532]3/2^-,[660]1/2^+ proton configurations coupled to a prolate deformed core. Furthermore, the negative parity bands built upon the 9/2^- isomeric states in ^183,185,187Tl are formed by a proton with the [505]9/2^- configuration coupled to a core with triaxial oblate deformation, and the positive parity band on the 13/2^+ isomeric state in ^187Tl is generated by a proton with configuration [606]13/2^+ coupled to a triaxial oblate core.