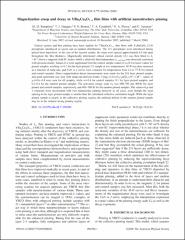 Critical current and flux pinning have been studied for YBa_2Cu_3O_7−x thin films with Y_2BaCuO_5 (211) precipitates introduced as layers and as random distributions. The 211 precipitates were introduced during pulsed laser deposition. In the case of the layered sample, the strata were spaced approximately 6.5 nm apart throughout the film thickness. Magnetically determined critical current density (J_c) was then fitted to J_c∝B^−α above a magnetic field B*, below which a relatively field independent J_c-self-field was observed, consistent with previous results. Values of α were suppressed from the control sample values of α=0.5 to lower values for pinned samples, reaching α=0.2 for the layer pinned 211 sample at low temperatures. M-H was then measured as a function of ramp rate, and U(J) vs J curves were extracted for temperatures from 4.2 to 77 K for pinned and control samples. Direct magnetization decay measurements were made for the 211 layer pinned sample, and good agreement was seen with ramp-rate-derived results. Using U(J)=(U_0∕μ)[(J_c∕J)^μ−1]B^−ν, values of μ≅0.6–0.8 were seen for all samples, while ν≅0.4 for control samples, 0.1 for layer pinned samples, and 0.2–0.4 for the random pinned samples. The activation energy scale U_0 was 600–700 and 400 K for layer pinned and control samples, respectively, and 400–500 K for the random pinned samples. The values of μ and ν extracted were inconsistent with two dimensional pinning behavior in all cases, even though the layer spacing in the layer pinned sample is smaller than the calculated collective correlation length. While the layer pinned sample is clearly in the collective pinning regime, the artificial defects in the random pinned sample may be in the isolated strong pinning regime.