Effect of Unrestricted Access to Running Wheels on Cancer-Related Fatigue 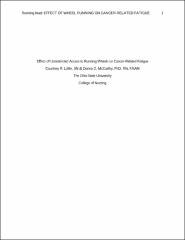 Cancer-related fatigue (CRF) occurs in 60-90% of cancer patients and significantly reduces functional status. Tumor growth causes significant wasting of skeletal muscle, thought to be a major factor in CRF. Cancer patients also report depressed mood, contributing to feelings of fatigue. Exercise has been shown to have anti-depressant effects in mice and humans, though its effect on tumor-induced muscle wasting has not been studied. The purpose of the study is to determine the effect of voluntary wheel running activity (VWRA) on muscle mass and depression-like behavior in a mouse model of CRF. In mice, fatigue is modeled as a decline in VWRA and depression is modeled as anhedonia, a loss of preference for sucrose solution. Twenty adult female, age-matched mice were divided into 4 groups, half having ad libitum access to running wheels and half serving as sedentary controls. Half of each group was inoculated with tumor cells and half were healthy controls. VWRA, sucrose preference and total fluid intake were measured on days 1, 7, 14, and 19 of tumor growth. Mice were euthanized on day 21 and the gastrocnemius muscle and spleen were weighed. Unrestricted access to exercise wheels did not affect sucrose preference compared with sedentary animals, and there was no evidence of anhedonia in tumor-bearing mice. Unrestricted access to exercise wheels did not improve muscle mass though VWRA was significantly correlated with muscle mass. Further studies are needed to determine if exercise improves muscle mass, fatigue, and depression in cancer patients.