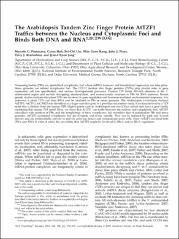 Processing bodies (PBs) are specialized cytoplasmic foci where mRNA turnover and translational repression can take place. Stress granules are related cytoplasmic foci. The CCCH tandem zinc finger proteins (TZFs) play pivotal roles in gene expression, cell fate specification, and various developmental processes. Human TZF binds AU-rich elements at the 3' untranslated region and recruits decapping, deadenylation, and exonucleolytic enzymes to PBs for RNA turnover. Recent genetic studies indicate that plant TZFs are involved in gene regulation and hormone-mediated environmental responses. It is unknown if plant TZFs can bind RNA and be localized to PBs or stress granules. The Arabidopsis (Arabidopsis thaliana) AtTZF1/AtCTH/AtC3H23 was identified as a sugar-sensitive gene in a previous microarray study. It is characterized by a TZF motif that is distinct from the human TZF. Higher plants such as Arabidopsis and rice (Oryza sativa) each have a gene family containing this unique TZF motif. Here, we show that AtTZF1 can traffic between the nucleus and cytoplasmic foci. AtTZF1 colocalizes with markers of PBs, and the morphology of these cytoplasmic foci resembles that of mammalian PBs and stress granules. AtTZF1-associated cytoplasmic foci are dynamic and tissue specific. They can be induced by dark and wound stresses and are preferentially present in actively growing tissues and stomatal precursor cells. Since AtTZF1 can bind both DNA and RNA in vitro, it raises the possibility that AtTZF1 might be involved in DNA and/or RNA regulation.