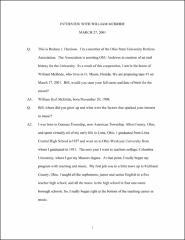 Professor William Byrl McBride, Professor of Music, who was ninety-two years of age when he granted this interview, was born in 1908 in Allen County, Ohio, and spent most of his early life in Lima, Ohio. After graduation from Ohio Wesleyan University in 1931, and from Columbia University in 1932 (where he earned his M.A. degree) he first taught English and music in Richland County, Ohio, and next he taught similar courses at Lima Shawnee High School for $1800 a year. Shawnee required all its teachers to attend summer school as a condition of contract renewal. This curious situation led McBride to enroll for the summer at Ohio State where he met several individuals involved in the early stages of the College of the School of Music, including Joe Leeder, Eugene Weigel, and Dr. Hughes. These fortuitous contacts led to an offer the following winter quarter to join the faculty of the music program at Ohio State. In those early days the music program was scattered all over campus. There was no central location for music until the construction of Hughes Hall in the early 1950s. Most music classes were taught in the old President’s residence at the northwest corner of 15th and High, the instrumentalists practiced in an old barn no longer wanted by the School of Agriculture as its soap barn, and the chorus practiced at the Ohio Union. The music program was originally part of the College of Education, although music education was only one part of the thrust of the School of Music. Later under the aegis of Provost Jack Corbally music was housed in the newly created College of the Arts. Eugene Weigel was instrumental in forging a unified program. He held “together a group of sometimes rather fractious musicians who wanted to go in different directions” and created a program recognized for its excellence no t only in Ohio but nationwide. (p. 6). Lou Diercks “did a magnificent job of promoting choral music on our campus.” (p. 7) The GI Bill of Rights that followed World War II brought a number of serious, dedicated, and inquisitive students to the School of Music who “really knew what they wanted to do and would dig in and work at it. “ (p. 7). In the postwar era the addition of the graduate program was another major change. These students, often veterans, were more philosophical, broad minded, and experienced than the average undergraduate student. Dr. McBride was named Director of the Marching Band, a position he held for three years. Students could be drafted on short notice and replacement musicians were recruited widely on campus. Despite the shortage of players no “girls” were allowed to march. Some men who marched in the band to fill out the depleted ranks could not play an instrument, and only pretended to play. During the war the marching band continued to perform at all the football games. Ohio State was the only Big Ten School to do so during the war. The rapid growth of Columbus after the war impacted the overall university, especially in finance. There was less effect on the School of Music, but Prof. George Hardesty directed the Columbus Symphony for a time. The greatest impact was in music education where close working contacts were always maintained with the public schools. The very controversial speakers’ rule, which required official permission for all outside speakers on campus, had almost no impact on the School of Music since it invited “performers” and not “speakers.” One of the ongoing tensions in the School of Music, although not a serious problem, was between “the performance people who were always concerned about more emphasis on performance,” and others who put “more emphasis on what’s going to happen to these boys and girls as they teach in the public schools.” Dr. McBride was very active in professional music education circles. He served as President of the Ohio Music Association, then the North Central Association, and finally served a two-year term as National President of the Music Educators National Conference. He was served as President of Phi Mu Alpha, the honorary music fraternity. Leading Themes Transfer of the School of Music from the College of Education to College of the Arts Centralization of scattered music program into Hughes Hall in the early 1950’s Impact of World War II on music program, including GI Bill of Rights and marching band Impact on the post-war, and controversial, Speakers Rule, on the College of Music McBride’s role in state and national music education organizations