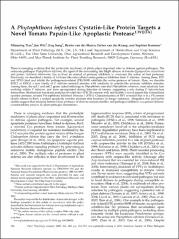 There is emerging evidence that the proteolytic machinery of plants plays important roles in defense against pathogens. The oomycete pathogen Phytophthora infestans, the agent of the devastating late blight disease of tomato (Lycopersicon esculentum) and potato (Solanum tuberosum), has evolved an arsenal of protease inhibitors to overcome the action of host proteases. Previously, we described a family of 14 Kazal-like extracellular serine protease inhibitors from P. infestans. Among these, EPI1 and EPI10 bind and inhibit the pathogenesis-related (PR) P69B subtilisin-like serine protease of tomato. Here, we describe EPIC1 to EPIC4, a new family of P. infestans secreted proteins with similarity to cystatin-like protease inhibitor domains. Among these, the epiC1 and epiC2 genes lacked orthologs in Phytophthora sojae and Phytophthora ramorum, were relatively fast-evolving within P. infestans, and were up-regulated during infection of tomato, suggesting a role during P. infestans-host interactions. Biochemical functional analyses revealed that EPIC2B interacts with and inhibits a novel papain-like extracellular cysteine protease, termed Phytophthora Inhibited Protease 1 (PIP1). Characterization of PIP1 revealed that it is a PR protein closely related to Rcr3, a tomato apoplastic cysteine protease that functions in fungal resistance. Altogether, this and earlier studies suggest that interplay between host proteases of diverse catalytic families and pathogen inhibitors is a general defense-counterdefense process in plant-pathogen interactions.