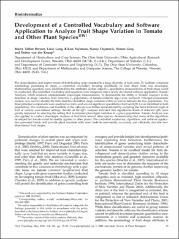 The domestication and improvement of fruit-bearing crops resulted in a large diversity of fruit form. To facilitate consistent terminology pertaining to shape, a controlled vocabulary focusing specifically on fruit shape traits was developed. Mathematical equations were established for the attributes so that objective, quantitative measurements of fruit shape could be conducted. The controlled vocabulary and equations were integrated into a newly developed software application, Tomato Analyzer, which conducts semiautomatic phenotypic measurements. To demonstrate the utility of Tomato Analyzer in the detection of shape variation, fruit from two F-2 populations of tomato ( Solanum spp.) were analyzed. Principal components analysis was used to identify the traits that best described shape variation within as well as between the two populations. The three principal components were analyzed as traits, and several significant quantitative trait loci (QTL) were identified in both populations. The usefulness and flexibility of the software was further demonstrated by analyzing the distal fruit end angle of fruit at various user-defined settings. Results of the QTL analyses indicated that significance levels of detected QTL were greatly improved by selecting the setting that maximized phenotypic variation in a given population. Tomato Analyzer was also applied to conduct phenotypic analyses of fruit from several other species, demonstrating that many of the algorithms developed for tomato could be readily applied to other plants. The controlled vocabulary, algorithms, and software application presented herein will provide plant scientists with novel tools to consistently, accurately, and efficiently describe two-dimensional fruit shapes.