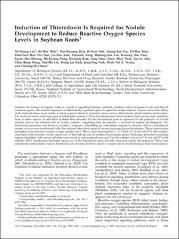 Nodules are formed on legume roots as a result of signaling between symbiotic partners and in response to the activities of numerous genes. We cloned fragments of differentially expressed genes in spot-inoculated soybean (Glycine max) roots. Many of the induced clones were similar to known genes related to oxidative stress, such as thioredoxin and beta-carotene hydroxylase. The deduced amino acid sequences of full-length soybean cDNAs for thioredoxin and beta-carotene hydroxylase were similar to those in other species. In situ RNA hybridization revealed that the thioredoxin gene is expressed on the pericycle of 2-d-old nodules and in the infected cells of mature nodules, suggesting that thioredoxin is involved in nodule development. The thioredoxin promoter was found to contain a sequence resembling an antioxidant responsive element. When a thioredoxin mutant of yeast was transformed with the soybean thioredoxin gene it became hydrogen peroxide tolerant. These observations prompted us to measure reactive oxygen species levels. These were decreased by 3- to 5-fold in 7-d-old and 27-d-old nodules, coincident with increases in the expression of thioredoxin and beta-carotene hydroxylase genes. Hydrogen peroxide-producing regions identified with cerium chloride were found in uninoculated roots and 2-d-old nodules, but not in 7-d-old and 27-d-old nodules. RNA interference-mediated repression of the thioredoxin gene severely impaired nodule development. These data indicate that antioxidants such as thioredoxin are essential to lower reactive oxygen species levels during nodule development.